Last week I hurriedly packed for my 10 day New Urbanism adventure in the Southeastern United States. In my rush I was only able to find and pack nine pairs of clean skivvies, but assured myself that I would be able to pick up a new pair while traveling through Georgia, Alabama and Florida.

Launching the odyssey, I arrived with my fellow PlaceMaker, the talented Mr. Geoffrey Dyer, to design a new resort community along Smith Lake in northern Alabama, where we were lucky enough to find un-fried food, but not lucky enough to find adult beverages as it was a dry county. The clients wanted Seaside… on a lake, as everyone in the region knew or had visited Seaside, which was obviously the most famous resort town in the region (within a 5-hour drive) and our next stop.

Geoff and I joined the CNU Magical Mystery Tour heading toward Seaside and Florida’s Redneck Riviera, when our bus promptly broke down in historic and beautiful Eufaula, Alabama. Being a late Sunday afternoon and on foot, I could neither find an open department store to buy new skivvies nor a restaurant able to legally sell adult beverages. Undaunted, we loaded the new bus and continued onward to Seaside, which was the most bustling town along the string of new towns in the Florida panhandle.

Leo Casas, former Seaside Town Architect, Frank Greene, current Rosemary Beach town architect, and Andres Duany led us through 30-years of town making principles using a series of built projects as a sort of town-making laboratory (a report on the complete Tour will be issued in the next few weeks). To my delight and chagrin, Seaside had plenty of booze, but no boxers or briefs. Neither did the upscale Alys Beach, funky Rosemary Beach, nor more predictable Watercolor for that matter. No worries though, as we were on our way to the Traditional Neighborhoods in and around Montgomery, Alabama.

The town center of Hampstead was thoroughly impressive in scale and a beauty mark along a mostly bleak State Highway. The most consistent criticism of all the TNDs toured was the bulk of the arcade columns obscuring shopfronts and the use of naturalized landscape that dominated urbanized streetscape. The landscape issue was most apparent in the residential areas of Rosemary Beach, where it concealed building frontages and their beautiful architecture, yet due to the absence of the landscape in the paved parking courts, the garage doors were the only architecture seen at the street level, distorting the truth. Seaside handles its parking differently and the same landscape was less of a problem.

To me, Alys Beach proved that beautiful architecture, urban design and landscape architecture can bring tremendous value to any scrubby landscape! The new town of The Waters was pleasantly attractive to most everyone except for the oversized square, which was a similar criticism of Seaside.

Another interesting point was my personal shift in criteria between a community TND and resort TND. Hampstead’s town center worked on many levels, and was supported by the high number of cars passing by. For the first time in several visits, The Waters felt a little ‘shabby’ in a ‘lived in,’ comfortable shoe sort of way. While only 5-years old, we saw people interacting with their town in very ordinary ways, which was more informal than the vacation mania and tension felt along the Florida coast. Still, neither The Waters nor Hampstead had a store selling much more than fine cheese, better wine and great food. We boarded the buses for downtown Montgomery. 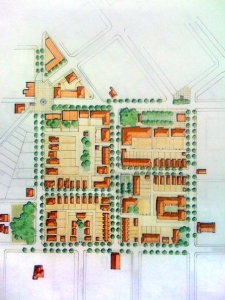 While it did appear that Geoff and I were voted off the tour bus when they dropped us off on the side of road in downtown Montgomery (the Magical Mystery Tour headed off toward Mt Laurel in Birmingham and Serenbe, south of Atlanta), our departure was actually due to us volunteering to assist Dover Kohl, CNU, and the City of Montgomery on a 24-hour charrette. Our team, and a handful of CNU 18 participants, designed an infill plan for a neighborhood center site along the National Historic Voting Rights Trail. Martin Luther King Jr. led civil rights marches from Selma to the State Capitol building in Montgomery along this route, and from the site the capital rotunda would be finally in view by the marchers, thereby making it a truly significant American place. We were honored to be working with the team and within the parameters of the existing SmartCode Planning Director Ken Groves and Dover Kohl had implemented city-wide. While tiring, the 24-hour charrette turned interesting when the local news broadcasted live from the event, asking how we felt with… “only 12 more hours to finish the plan, will you make it!?!” The hyperbole made it quite fun and 24-hour charrette leader, Chad Emerson, played along as much as possible. However, my shopping choices in downtown Montgomery were limited to late night dining, bars, and whatever toiletries the hotel offered. No socks, no undershirts, no underwear, but Geoff and I were on our way to downtown Atlanta for the 18th Congress for the New Urbanism.

CNU 18 was inspirational, uplifting and educational as usual, however, Atlanta’s downtown tourist district offered only a regrettable shopping experience. It was nearing my 9th day quickly and it dawned on me that in order to buy new shirts, pants, socks, and under garments for everyday use (and not consisting of souvenirs) I was at the mercy of a car and regional retail on the suburban fringe. Downtown Atlanta offered no shopping stores as my daily needs were met in hotel lobbies and restaurants, therefore I had great breakfasts, up-to-the-minute news, coffee, fine dining, and many adult beverages. My wife and kids were easily found their required travel gifts and I could walk many places of great interest, but despite our 30-years of winning the reconfiguration of our American landscape, I was still trapped by the need for an automobile to visit a Target, Wal-Mart or some other regional department store in order to supply my weekly and monthly goods needs.

The urban environment was about to affect my quality of life… I was going commando.

Affordable family retail still mostly exists on the periphery of our everyday life. While we know of 2-story Targets and other one-off urban stores, in my personal experience only Santana Row offers a purpose-built, dense, mixed-use, commercial and shopping center as it stands as a beacon of walkability in sea of big box sprawl in downtown San Jose, California. Yes, my last day at CNU was a liberating experience in many ways, but this only obfuscates my point: The majority of our nation is still in desperate need to relocate themselves or their general shopping choices in closer proximity to each other in order to enhance the quality of our lives. Steve Mouzon’s very good new book, The Original Green, begins with the philosophical point that we do the right thing because we ‘want to’ rather than because we simply ‘have to or ought to.’ We are supposed to be building complete places, but how are we measuring up to the task? We should be building towards an intensity that accommodates for the neighborhood and region scale rather than giving up our greatest tax and job generating goods to the periphery.

13 responses to “Beaches, Booze and Briefs: A New Urban Odyssey and Retail Lament”