Can Cities Help You Forget Your Troubles, C’mon Get Happy?

In most physical and policy planning, triple bottom line benchmarks focus on environment and economy, and tend to skim over the subject of society. That’s probably because urban design impacts are much easier to measure with respect to profit and planet than they are with respect to people.

Any good MBA professor preaches, “What gets measured gets done.” For several generations, we’ve been proving that point with our relentless focus on measuring our collective success via a host of global economic indicators. Since An Inconvenient Truth, environmental factors have joined the economic mainstream as well, sparking a whole new breed of Eco Warriors.

Now, we’re starting to get our arms around some of the bigger public health issues connecting society with the built environment, particularly on the obesity, diabetes and depression fronts. Proponents of gross national happiness to augment gross national product would like to see our society focused on conserving instead of consuming and connectivity instead of distrust.

Still, how do we measure national happiness, well-being, and social capital as they relate to the way we plan our neighbourhoods, towns and cities?

This week’s Wall Street Journal article released the 2010 Legatum Prosperity Index. “Wealth alone does not make for a happy and successful society. Happy citizens are produced as much by democracy, freedom, and entrepreneurial opportunity as they are by a growing economy.” Of note, this index tracks social capital as well, starting to value people’s connections and the higher levels of trust that result from frequent interactions.

“Our gross national product, if we should judge America by that, counts [..] the loss of our natural wonder in chaotic sprawl. It measures everything except that which makes life worthwhile.” – Robert Kennedy, 1968

The Gallup-Healthways Well-Being Index tracks life evaluation, physical health, emotional health, healthy behavior, work environment, and basic access. Once our basic needs are provided for, increased wealth does not increase our happiness appreciably, nor does unemployment effect us as much as we might think. Instead, happiness is due to our sense of belonging, and not our income, confirmed by John Helliwell, professor of economics at the University of British Columbia. Public spaces that bring people together in congenial activity produce happier citizens than those – like traffic jams – that spur animosity and aggression, Professor Helliwell says. 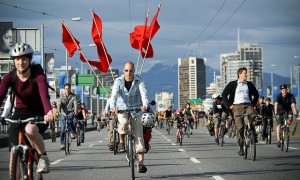 Still, neither of these indices correlate urbanism to happiness. But the City of Vancouver is starting to. As one of the world’s most livable cities, Vancouver is asking itself what more it can do to provide for physical, social, emotional, and spiritual needs. In doing so, it’s adding spirit to the other pillars of a healthy community: complete community (land use, density); healthy mobility (transit); healthy buildings (zero carbon); thriving landscapes (open space); green infrastructure (water, sewers, storm); healthy food systems (organic agriculture, nutrition); healthy community (facilities, programs); and healthy abundance (sustainable economic development).

Advancing the idea of “spiritual urbanism,” Vancouver’s Healing Cities finds inspiration in the human body’s ability to rebuild, repair and regenerate, and asks what it takes for our cities to heal themselves, and in turn heal us. Oxytocin, the trust hormone, goes up with eye contact. We get a whole lot more of it while walking. Which is just the beginning of balm to the spirit fostered in walkable neighbourhoods.

And it’s interesting how some things go full circle, with a healthy society making for a healthy economy. ‎60% of East Coast developers say, “to stay competitive, they are shifting away from bigger traditional home designs to conservative pedestrian-oriented mixed-use neighbourhoods.” People get more enduring happiness from experiences in their neighbourhood than possessions in their home.

On the other end of the spectrum, what makes people the most unhappy? Not work, but commuting to work.

Just as Vancouver is a shining example to the developed world, Bogota’s urban happiness movement is an urban innovator of the developing world, led by former Mayor Enrique Peñalosa. “There are a few things we can agree on about happiness,” he says. “You need to fulfill your potential as a human being. You need to walk. You need to be with other people. Most of all, you need to not feel inferior.” A key to equality is providing dignified, functional transportation, which Bogota has done with a powerful version of bus rapid transit as well as extensive bike and pedestrian networks.

“When you talk about these things, designing a city can be a very powerful means to generate happiness,” Peñalosa says. By linking urban design to the economics of happiness, Bogotans have become happier. The murder rate fell by an astounding 40% during Peñalosa’s term and continues to decrease, along with the number of traffic deaths. Traffic moves three times faster now during rush hour. And the changes transformed how people feel.

“A good city is like a good party – people stay much longer than really necessary because they are enjoying themselves,” per Jan Gehl, author of a City for People, and leader of Copenhagen’s transformation to a bikeable, walkable city. Gehl encourages urban design from the perspective of the five senses, taken at walking speed. This eye-level approach does much to address the needs — and the happiness — of the individual.

So I still don’t have an Urban Happiness Index. But I think it’s coming soon, to a street near you.

22 responses to “Can Cities Help You Forget Your Troubles, C’mon Get Happy?”