My Sleuthing Adventure: Where are Western Canada’s Form-Based Codes?

This is no small problem. Those of us working in the region are continuously grilled by municipalities with the same question, often delivered with a suspicious, cocked eyebrow: “Where are they? Where in Canada have they, or any other alternative zoning regulation, been enacted?”

The answer we’re obliged to offer is unfortunately neither reassuring nor helpful:  “We’ve turned up little evidence,” we mutter quietly. Little enough, in fact, that a comparable municipal mentor is typically unable to be found.

A mystery is at hand.

A recent study co-authored by PlaceMaker Hazel Borys revealed over 300 form-based codes adopted or in progress in the U.S. There, despite a difficult economy, successes and increased interest in this important planning tool continue to rise. And even here in Canada, a country that is no stranger to the proliferation of automobile-focused planning and all the consequences that come with it, form-based codes have become a hot topic.

So where are they? Let the sleuthing begin.

My initial theories were loose, and steeped in Canadian pride. Perhaps the U.S. had developed such pressing, super-sized problems that they demanded a quicker response. Or maybe the critical mass of its population, ten times the size of Canada, pushed early innovation of form-based regulations. Or perhaps Canada is simply uninterested in a “Made in the USA” idea and is instead waiting for a “locally grown” solution to deal with its own unique growth issues.

These are just a few of the possibilities but, with each journey down a new avenue of speculation, the further I got from a definitive answer. I needed to start with the big picture, then work my way down.

We essentially abandoned the idea of building walkable urbanism as far back as the 1930s and, by the 80s, denizens of our fair continent were only beginning to come to terms with the consequences of the previous four decades of building cities around the automobile. But as the seeds of their growing dissatisfaction began to germinate in the U.S., in the late 1980s through the early 1990s, a number of pioneering projects came out of the ground and with them two important rallying cries for change: The practice of designing and building urbanism articulated in the Charter of the New Urbanism in 1996, and the 10 Principles of Smart Growth formalized in 2003. 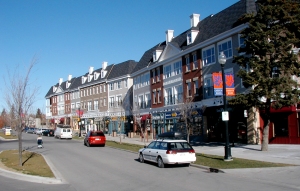 New urban neighbourhoods like Garrison Woods in Calgary have been approved in spite of current regulations.

Though most regions now have their own built example(s) of New Urbanism–often approved in spite of local planning practices rather than because of them–the idea of Smart Growth as a systematic change was still seen as the bleeding edge in the 1990s. Nonetheless, the problems being faced were mounting and, slowly through the late 90s and early 2000s, these seemingly new ideas began to seep into hundreds of local municipal plans and policies. At first they were general: concern for pedestrians, the thought of mixing uses, fixing the inner city, and other broad ideas.

But by the mid 2000s, (yes, this is recent history) you would be hard pressed to find any municipality with any concern for sustainability not have thoughts of walkability, mixed use, and more compact development forms dominating their municipal vision.

Which brings us to the point in our narrative where reform efforts evolved to their logical next step: Changing the rules to match these newly emerging goals. After all, the regulations at hand were written to produce something else in a time when new walkable urbanism was virtually unheard of.

Examining the Scene of the Alleged Crime

I amped up my investigation: Perhaps the plot line of North America’s Smart Growth saga failed to play out exactly the same way on our local stage.

My hypothesis? Within western Canada’s physical, cultural and climatic bubble, the basic ideas of Smart Growth did not begin seeping in in earnest until the mid 2000s, a gut-hunch I subsequently confirmed through review of multiple municipal plans from the era.

Now factor in that, in most of our western Canada cities, an overall municipal plan is required to be updated or created every 5-10 years as the early broad-policy stage of the visioning process.

Given that it takes roughly two years from plan inception to plan approval, it would probably be 2007 or so to expect to see western Canada municipal plans demanding mixed uses, walkability, complete communities, and more compact development forms. And not surprisingly, confirmed by my meticulous investigative skills, the facts bear this out (Have you seen Calgary’s new plan?).

Many form-based codes in western Canada are project specific, like the SmartCode adopted for Mike Holmes' Windwalk project in southern Alberta.

In a perfect world, a municipality would jump right on a form-based code or other zoning alternative to make way for their new vision, but this is new territory and it takes time. Only municipalities such as St. Albert, Alberta, Richmond, B.C., and a handful of others started exploring form-based codes earlier in the decade, allowing for their more advanced position today. For most, it takes a few years for the idea of new zoning rules to make it to the front burner.

So that, my dear Watson, is my best answer to this curious mystery. It’s not that our subject is missing, kidnapped, bound, gagged or otherwise at the mercy of nefarious villains. It is the simple fact that, here in western Canada, he has yet to really be born.

The timing is right, however, and the will to conceive is growing every day. If my own efforts and the efforts of progressive city leaders and other practitioners throughout the region are any indication, it won’t be long before form-based codes are popping out all over. So stay tuned…

News of innovation and implementation comes often. If you like the idea of form-based codes in general, and the SmartCode in specific, and would like to stay on top of what’s happening, consider liking it in the more modern, technologically connected Facebook way.

3 responses to “My Sleuthing Adventure: Where are Western Canada’s Form-Based Codes?”