St. Patrick, Charles Dickens and the Role of Beer in Community

This morning I took a moment to reflect upon the challenges and tragedy of the past year — BP’s Deepwater Horizon oil well, Aussie wildfires, the Christchurch and Haiti earthquakes — until, as a Californian, my mind inevitably drifted back to current events in Japan and their nuclear radiation currently floating its way stateside over the Texas-sized plastic trash flotilla/vortex in the northern Pacific.

And did I mention last week’s news on democratic revolution in the Middle East/North Africa? It’s enough to drive a guy to drink.

Well, thank goodness it’s St. Patrick’s Day, which means I can devolve into a James Howard Kunstler American Zombie, satiating my anxiety by eating cheese doodles, dressing like a hobo clown and watching March Madness down at the local!

As mentioned in previous posts, I live in a great neighborhood that is magically blessed with both walkability and a healthy mix of uses. For those among the walkability faithful, that magic mix includes pubs, cafes and ice creme parlors. Notice that I used the term “local” above to describe my favorite neighborhood bar. That’s because I was fortunate enough to live in London during graduate school and immersed myself in their pub/local culture, which is notably different from the American take.

The European Public House, or “pub,” is sometimes referred to as the “local.” These are mixed-use, mixed income community incubators that, in neighborhoods and villages, are the focal point of community life. Their long history is traced to Roman transportation engineering creating the need for inns at their highway interchanges (or crossroads). These inns turned to alehouses, which turned to meetings houses, which became the pubs of today. However, in the early 1800s, someone introduced booze and “Gin Palaces” took over, creating both creative fodder for Charles Dickens and illustrator William Hogarth, and great strife among the villagers. This led to licensing laws and greater government control. 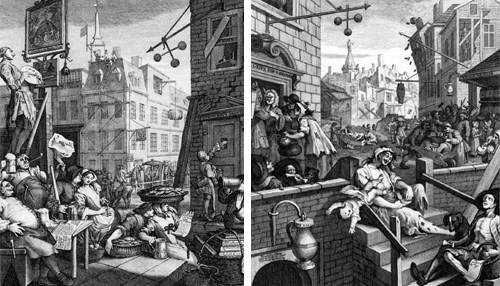 Today, in large part due to the globalization of beer companies, English pubs are facing new challenges and have been closing at an alarming rate. But don’t count them out just yet. Leon Krier’s new town of Poundbury just enjoyed the opening of their new pub, The Poet Laureate.

The Poet Laureate, a recent addition to Leon Krier's Poundbury.

Back home, the American take on Bars is quite different. In most places, bars are single-use, demographically monocultural escapes from community, with an unmeasured yet oftentimes tolerated degree of drunk driving danger. In San Diego, bar strips were historically located near the beach and around college campuses. However, with urban revitalization, such single-use, monocultural bars are now landing in older, now hip and cool, neighborhoods. They are causing age-old conflicts and neighborhood strife with a call for greater government control.

My neighborhood is fortunate to have had a history with complexity, mixed-use and bars. We understand that well-crafted beer goes well with well-crafted food and should be located in small building footprints on important street corners. We are learning to appreciate locally brewed beers and have cultivated a beer connoisseur’s ethos that turns a night out into a ‘tasting’ event rather than a drinking race based upon how well you can bounce a quarter. Combine this attitude-shift with a healthy lifestyle that’s since cultivated a new found breakfast and biking culture and voila!: Our neighborhood’s prevailing cultural perspective measures pub establishments as enhancing, rather than undermining, the surrounding community.

At least for today…

The hip/cool success factor of my neighborhood has led to the monolithic college bars wanting to join in our fun. During our city’s Community Plan update, I worked with a local business group to submit an alternative plan for consideration. In order to keep the conflicts from happening in predominately residential areas, the plan is to allow for new pubs (alcohol permits) in a few complex, mixed-use, neighborhood centers. In addition, with parking availability controlling the building size, the existing small block pattern inherently limits the ability for single-use, large-format bars down our ‘High Streets’ (my use of another English word for an American Main Street). Therefore, in an attempt to thwart our own Gin Alley debacle, we’re recommending less government control and more neighborhood design control. 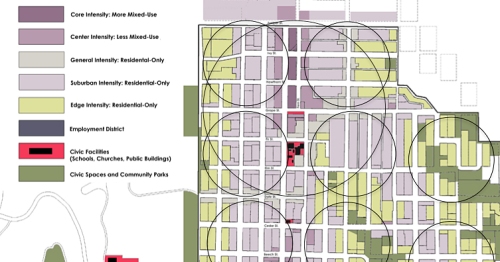 A European religious holiday turned American debauchery event, I hope you all enjoy St. Patrick’s Day at your favorite local. Savor the time, place and people, as well as the beer. Spend time rooting for your favorite college team while discussing with your neighbor how to best distribute iodine pills, share rides to work and figure out how to maintain a source of clean water in preparation for additional and pending environmental emergencies.

And please, walk home. They call ‘em “locals” for a reason.

Not only does the city of Decatur, Georgia, embrace pub culture,
they leverage it for economic development. Click for larger view.

5 responses to “St. Patrick, Charles Dickens and the Role of Beer in Community”