Gettin’ Paid: Placemaking and the Importance of Compensation

Over a decade ago Andres Duany of DPZ taught me that, more times than not, NIMBY opposition stems from a sense that proposed development is not of equal or greater value to what would be lost.

Tony Nelessen, the inventor of the Visual Preference Survey, confirmed this lesson a few years later when he came to my town and conducted one.  Presented with images depicting environments of varying character, participants ranked them from negative 10 to positive 10. Images of untouched nature, like this one below, scored around a positive 7. Pretty tough to beat. 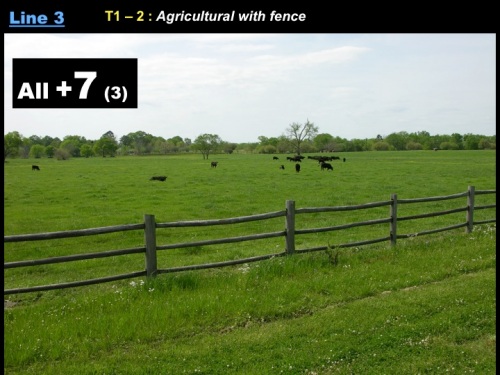 Images of development that was replacing nature, however, fluctuated greatly, even if they depicted the same density. Like this: 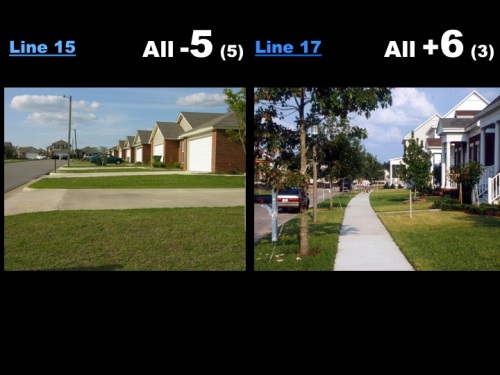 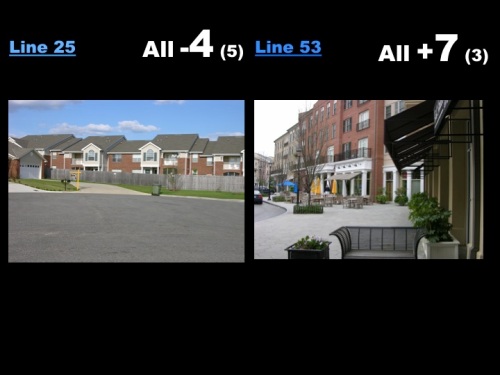 These results clearly showed that some types of development adequately compensate the larger community, while others are not just an uneven trade, but a lousy trade altogether (if you wish to see an entertaining catalogue of lousy trades, consider viewing James Howard Kunstler’s “Eyesore of the Month.”).

Is it worth trading a positive 7 for a negative 3?

I have found that looking at placemaking issues through this prism of compensation helps people better understand how to address their particular placemaking issue, whether they’re trying to revitalize their downtown or simply select a dwelling that suits their needs.

Here are a few placemaking issues that can benefit from a compensation analysis.

1. Pedestrian Propulsion:  Humans are willing to walk longer distances if they are compensated by a safe and interesting walk.  On the other hand, if the walk is boring because a place shows no signs of life (e.g.’s, gaps between buildings; buildings set back too far off the street; windows that do not permit walkers to see inside the building; etc.), the humans will stop in their tracks because they are not being rewarded for their effort. Steve Mouzon calls this concept Pedestrian Propulsion.

Little to no compensation results in low Pedestrian Propulsion:

Re-envisioned, however, the area will result in the kind of high Pedestrian Propulsion shown below (images produced pursuant to the Dover Kohl downtown charrette by Steve Price at Urban Advantage). So, the City of Montgomery adopted a SmartCode to help lead to this transformation.

2. Downtown Living.  Some people are pre-wired for downtown living while others are not. For those who fall in the middle of these two extremes, they need to explore whether their downtown adequately compensates them for its perceived inconveniences.  For example, in my town many people would claim that downtown has more noise and artificial light, less convenient access to nature, a greater threat of crime, and less convenient parking for guests. To compensate for these perceived inconveniences, the city offers more convenient access to jobs and entertainment options while providing a more vibrant environment. Are downtown residents in your community adequately compensated?

The office building below is designed in a suburban manner (suburban setbacks, and not designed for interaction with passersby) even though it is downtown. It clearly is not doing its job of compensating downtown residents with a more interesting and vibrant neighborhood. 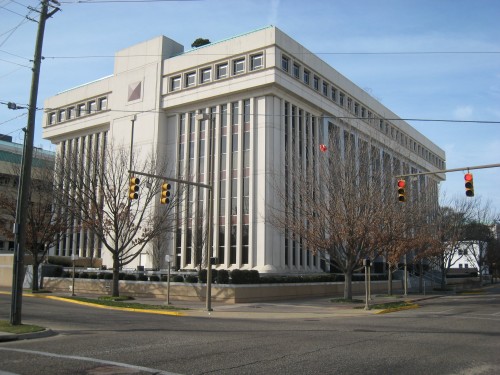 On the other hand, this image below of Bethesda Row shows how the residents in this area are compensated with a vibrant and interesting streetscape. 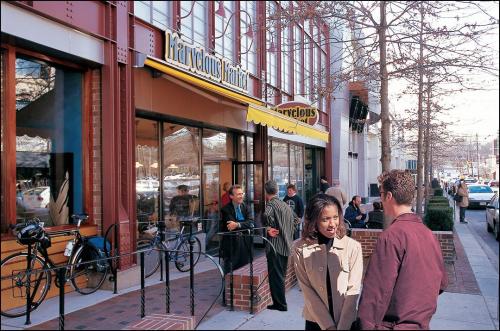 3. Small Yard (or no Yard):  Most Americans believe that bigger is better, including the size of your yard (assuming you have one). The larger lot is perceived to compensate the owner for its increased cost with greater privacy and the flexibility of using the yard for more purposes than a smaller yard. But, a smaller lot has the potential to compensate the owner with: (a) greater privacy if the dwelling is designed with a courtyard; (b) less yardwork; and (c) greater likelihood of convenient destinations due to the increased density.

This dwelling below enjoys a wonderfully private rear courtyard due to the design of the dwelling into a principal building, two backbulidings, and a garage apartment. 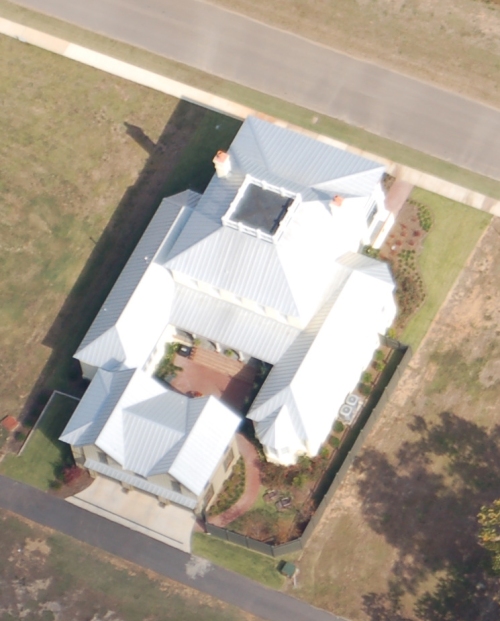 Meanwhile, these conventional homes below, which are less than a mile away on lots which are 10 times larger, do not enjoy any private outdoor space.

Concurrently, this courtyard below at I’On offers a private rear oasis just off main street. 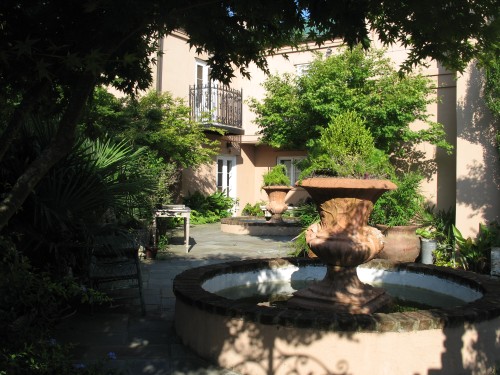 4. Small Dwelling: Like large lots, most folks aspire to larger homes even though they cost more and require greater upkeep. From a lifestyle perspective we have learned about the merits of smaller homes from Sarah Susanka’s “Not So Big House” movement, the Katrina cottage, and most recently with Ross Chapin’s “Pocket Neighborhoods” book.  But, how might a neighborhood compensate those who opt for a smaller dwelling?  Essentially, the key compensation is the public realm — the area outside the house.  Are you rewarded with restaurants where you can entertain friends, a theater (instead of having your own home theater), a gym (instead of having your own home gym), a wonderful park?

My mother-in-law moved into this 762 square foot cottage.  Being a widow, she didn’t need a larger home, and enjoyed having to maintain a smaller place.  And one of the compensations was having this beautiful park right around the corner from her cottage.  In addition, she enjoyed the YMCA and restaurant which were both right around the corner (she actually worked at the Y).

5. Master on the Main: If you ask a realtor whether the master bedroom should be on the first floor of a house or the second floor, most will tell you that it must be on the first floor in order to sell — unless they think about the compensation issue.  What if the purchaser is compensated for walking up the stairs by having a magnificent view? 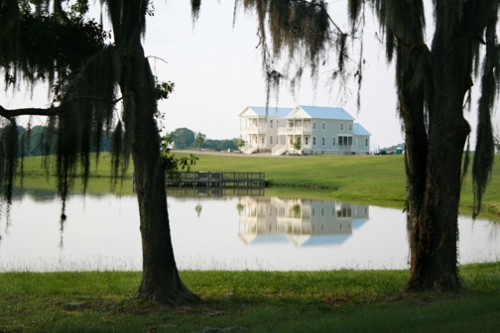 6. Freeway Removal: CNU President John Norquist has been an advocate for promoting economic development in downtown areas with the removal of pedestrian-hostile highways. You can learn more about this “Highways to Boulevards” program at this link.  The core argument is that the cost and inconvenience will be outweighed by the amount of redevelopment that will occur around the displaced highway. Here is an image of Octavia Boulevard in San Francisco that replaced a small interstate spur — and resulted in the city being compensated by a massive amount of redevelopment in the area. 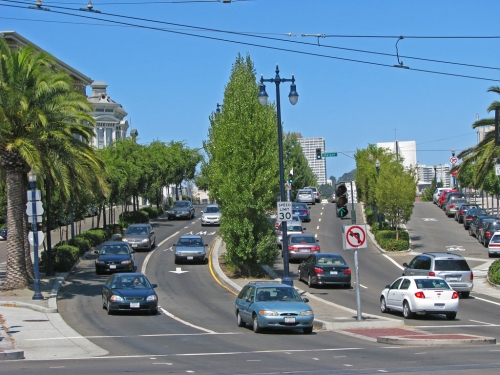 7. Parking Deck: A parking deck can provide the benefit of convenient parking in areas where spaces are limited. But, is that enough compensation? Should a parking deck also compensate the motorists after they get out of their cars and become pedestrians? If so, parking decks should contribute to the vibrancy of a downtown, but they cannot do that so long as they are naked; i.e., no liner building.

While this parking deck provides parking, it does not compensate pedestrians or surrounding property owners with a vibrant and interesting streetscape. In fact, it has killed everything around it.

On the other hand, this parking deck below in downtown Staunton, Virginia, respects the main street by providing first floor uses that engage pedestrians and the surrounding buildings. The upper floors merely mask the parking deck, but that is sufficient compensation to keep this street vibrant and interesting.

Call it “Fair Trade Placemaking” — complementing the quantifiable measures of economics with the qualitative ones people use in their ultimate perceptions of value.

Got it? Then now’s your chance to put your newfound understanding of compensation into practice, while helping me out with future posts:

Filed under Development, Planning and Design, Sales and Marketing

9 responses to “Gettin’ Paid: Placemaking and the Importance of Compensation”