When I was first exposed to the New Urbanism in the 1990s, it was as a 9 to 5 ad-man with an appreciation for music and art. Killing time one day in my dentist’s waiting room, I stumbled upon “Bye-Bye Suburban Dream,” the cover story of the latest Newsweek magazine.

I still remember the feeling I had as I read it. Unbelievable, I thought. This is a movement creating places where people, community, beauty and culture are once again prioritized. Where the interconnected everyday experiences that color our lives are valued. Where commerce and art can both thrive.

Call it the restoration of soul. A resurrection of the wisdom embedded in our most-loved places. And with such affection for historic precedent, you’ll forgive my seemingly simplistic assumption at the time that these emerging New Urbanists wouldn’t just be allies with historic preservationists. They’d be thick as thieves. Warriors united in a mutual battle for enduring cities, towns and villages.

One side preserving history’s great lessons. The other taking them forward.

Over time, I began noticing a strange tension I couldn’t explain. When prominent New Urban projects embraced historic styles, it was often preservationists lobbing the charges of “fakery.” In their view, the desire to emulate, for example, the great streetcar suburbs of the 1920s was “contrived” and “dishonest” because it failed to express the zeitgeist of the modern age.

And yet, somehow, these same critics seemed to adore what appeared to me, the simpleton layman, as essentially the same thing. After all, there’s been no shortage of efforts to preserve the grand estates of late 19th century industrialists, even though many of those homes borrowed styles born during the Renaissance. That’s not just snatching from another time period. It’s snatching from another culture altogether.

How honest is that?

It just didn’t make sense. I grew up outside Washington, DC, where important civic buildings express our founding democratic ideals with a style born several thousand years ago, a full ocean away. An architecture of neither its time (the birth of our nation) nor its place (a swamp between Virginia and Maryland), and yet indispensable to our collective identity as a nation.

Dishonest! Not of its time!

When Tudor Revival emerged in the early 20th century, its timber frames were typically included solely for stylistic reasons, rather than bearing the weight of the house as they did originally. Is this fundamentally different from a newly constructed Greek Revival foursquare in a contemporary New Urban project adorning its porch with comparably stylistic columns? Or an infill Craftsman employing Hardiplank instead of clapboard? Surely no, and yet newly-built examples are deemed fakes while historic ones inspire heroic efforts to ensure their longevity. 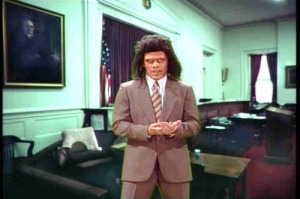 Your 50-Year Rule frightens and confuses me.

Similar discrepancies abound, each nudging me towards greater sympathy for Phil Hartman’s classic “I’m just a caveman” SNL character. Like that befuddled neanderthal, I’m just a regular person who appreciates some places over others. Not because academic ideology says they’re worthy but because they simply feel, and work, better.

As someone driven by the simple notion that preserving our past allows us to harvest lessons for creating better places in the future, preservationist rules and practices can seem contrary to every notion of common sense. Completely baffling, which confounds things further because I consider myself a preservationist. I reject the 20th century’s culture of disposal and reinvention. I hold artistry in high regard and relish beauty in my surroundings. I see great economic opportunity in the craft ethos and equally believe that the greenest home is one already built. I want preservation, in tandem with building for longevity, to exist as our normative cultural behavior. 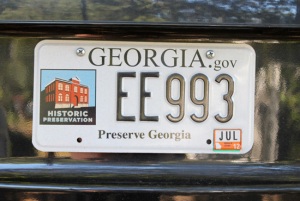 Do NOT question my commitment to preservation.

Hell, I even pay a premium for my preservation-boosting license plate. All of which makes me want to understand why this clash of values even exists.

The answer’s actually a lot less complicated than you’d think. During the 20th century, as it became increasingly apparent that we were throwing away our built heritage, people began banding together in opposition. Not surprisingly, they started with the truly remarkable buildings. The ones whose worth was, to most everyone, obvious and undeniable.

Their motivation was love. These were buildings that inspired great affection and people wanted to save them. So they turned to the only authority with the power to do so — the courts — and that’s where modern preservation ideology was born. Because, in the course of all those proceedings, activists discovered a consistent reality: When they argued on behalf of intangibles like stylistic purity or emotional attachment, they lost. But when they spoke of a building’s demonstrative role in our ongoing historical narrative, they won.

The message was clear: Discuss how a building is loved (or deserving of love) and you get nowhere. Position a building as a marker on our cultural timeline and you get legally defensible results. Which is why, in the preservation playbook, a house built today that looks like it could just as easily have been built a hundred years ago presents a problem.

Now, far be it from me to malign people for being effective. Preservationists took the pragmatic route: Study what works, then develop principles around those successes to provide a best-practices guide for moving forward. But there’s a certain irony to that as well, as it’s exactly what New Urbanists do–and get criticized for–in relation to urban design.

Can’t We All Just Get Along

It’s hard to imagine how we can repair this divide. Saving buildings is a legal process and strategy matters. I don’t fault preservationists for that, and know that much of our remaining historic building stock exists entirely through their efforts. For better or worse, age has become a litmus test proven to work. But I can’t help thinking that, for most people, saving buildings has little to do with a number, be it 50 years or otherwise. It has to do with the admittedly subjective perception of worth.

Excellence endures. Maybe not, regrettably, as a specific building but certainly as a repeatable stylistic pattern or technique. Maybe not as a specific collection of buildings but without doubt as retrievable instruction for planning neighborhoods and towns in the future.

Excellence inspires imitation. It’s not about a position on the historical timeline. It’s about applicability. To a preservationist, the history of human settlement is a sort of interactive museum featuring a series of definitive, time-stamped displays (my observer’s assessment, not a criticism). But to everyday people throughout history, and to New Urbanists now, it’s a toolbox, filled with items that may come in handy on the work ahead.

The merits, or lack thereof, of age-based value weren’t much of an issue when the buildings being preserved were almost universally acknowledged as special. But we’ve recently passed the 50 year threshold for ranch house subdivisions. As we move into an era of diminishing resources and increasing demand for walkable, transit-friendly urban living, should we really be systematically enshrining these experiments in cheap gas, leisure-class consumption, which often occupy first-ring suburban settings now best suited to redevelopment and increased urbanization?

It’s a tough call and it’s just the tip of the iceberg. Nipping at its heels are the McMansions of the 80s. Will they inspire the same impassioned rallies when they turn 50? If age equals value, how do we make the collective, subjective decision that maybe some things should just fade away?

In the early 1920s, just down the road from where I now live, businessman George Willis embarked on an effort to build Avondale Estates, the picturesque equivalent of what we today call a “traditional neighborhood development” — a master planned town of varying housing types in walkable proximity to a civic and commercial core.

He planned it as a Tudor village modeled on the centuries-old birthplace of William Shakespeare, Stratford-Upon-Avon. But it would be a mistake to assume any connection between the medieval stylings he chose and the ramshackle Georgia farmland he’d purchased. Instead, he simply wanted to honor fond memories of an English vacation he’d once shared with his wife.

Did he do this to be dishonest? To perform an act of fakery? To violate the sanctity of the historical timeline? Of course not. He did it because he was human. And to be human is to protect and promote what we love.