Jobs come up in every community-building conversation these days. It’s making me go back to the start, to think it through. What created jobs in the first place?

In the last few decades, many cities have been racing to the economic bottom trying to incentivize jobs. It’s led to jobs being all about giving away resources, and not so much about the value of connections.

If we were to shift our perspective for a moment, and to think of jobs as a commodity, the supply / demand curves for jobs would put companies and entrepreneurs on the supply side selling jobs, and cities and governments on the demand side buying jobs. That is, cities have tended to “purchase” jobs with tax incentives and other mechanisms that welcome businesses. 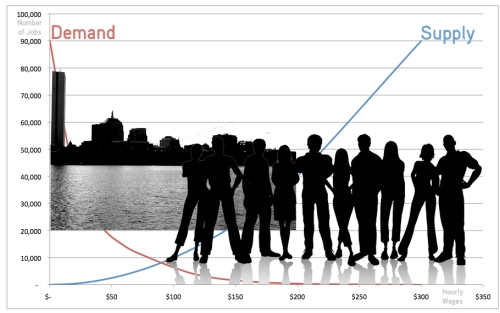 And yet, often they hold no currency when it comes to the connections that people are after. That business is after. Sure, cities can offer tax incentives, although on today’s dime, they’re getting skimpy. But what the creative class and its companies are looking for are connections.

Also it turns out that those incentives used to welcome business don’t always pan out from an economic perspective.

100 years ago, this continent’s economy was largely based on trading goods. In the last few decades we’ve off-shored much of our industrial production to become a service-based economy. But in the latest economic downturn, ideas are the new currency, and with them we’re seeing local economies starting to form again, trading goods.

Having come full circle, savvy cities are noticing what’s driving the economy, and it’s often to do with character-rich places. The most effective environments for fostering jobs are creative spaces where people can gather, connect, and exchange ideas – the new currency – often within smaller-scale local economies.

I’ve noticed this dynamic happening here in my city, Winnipeg. As one of the strongest economies on the continent at the moment, the Manitoba Miracle is worth thinking through. On a macro level, it “runs like an obsessively defensive investment portfolio with a balanced weighting of sectors.”

But on the streets, and in the neighbourhoods, there’s more to it. The places that have a balanced weighting of uses are enjoying the economic benefits of diversity as well.

Take the Exchange District, for instance. Over the last 3 years, a quarter of a billion of new investment has happened on 12 blocks around Main Street. Not your usual development story in the recent economy. And that’s just the tip of downtown Winnipeg development.

According to Ross McGowan, CEO of CentreVenture, it’s because of the “tremendous stability here, deep-seated community commitment that permeates all we do. 10 years ago people couldn’t get their money out of here fast enough. Now it’s coming back in droves.”

“It’s about having the toolbox and structure – a focused, strategic plan, and a way to implement it. Economic development is a fairly simple thing to do, with the right tools. Don’t get lost in years-long area structure plans, but be responsive to the market demands that are a good fit for local character.”

It’s all the economic drivers of character-based city planning and zoning reform that we’ve been talking about lately.

So are big deals like an NHL hockey franchise or the first national museum to locate outside of Ottawa economic development silver bullets? Or are they partly the results of great placemaking that gets it about resources and connections?

Cities that hold this dual currency are defining resilience these days.

“He doesn’t speak the language,
He holds no currency.
He is a foreign man,
He is surrounded by the sound, sound,
Cattle in the marketplace.
Scatterlings and orphanages.
He looks around, around,
He sees angels in the architecture,
Spinning in infinity,
He says, Amen! and Hallelujah!”

One response to “Resources + Connections = Jobs”