On the Street: The DNA of place and the ROI of movement

In business, last year’s income statement is a major driver in this year’s action plan. If a product or service was profitable, then it’s nurtured and grown this year. If a deliverable creates a loss, then change is made as quickly as possible.

And yet our governments aren’t geared to think this way unless it has to do with a change from business as usual.

The ROI of Movement
The Washington Examiner reported this week that D.C.’s 37-mile streetcar network would cost $1.5 billion and spur development and increased property values by $15 billion. That works out to an ROI of 9x. If we assume a 25-year timeframe to realize the gain, we’d be talking a 36% rate of return.

When’s the last time your local government delivered those sorts of returns?

But more importantly, when’s the last time your government placed a ROI on business as usual? The ROI of building one more road to a bedroom community and strip commercial? If you’ve done it, please comment below. There are precious few.

That’s an ROI of 10.8x, and often with less initial investment required than transit. And that’s before you factor in GHG impacts, which are much harder to value. It’s not clear if these returns are factoring in the $3.2 trillion that obesity will be costing us every decade, starting in 2020. 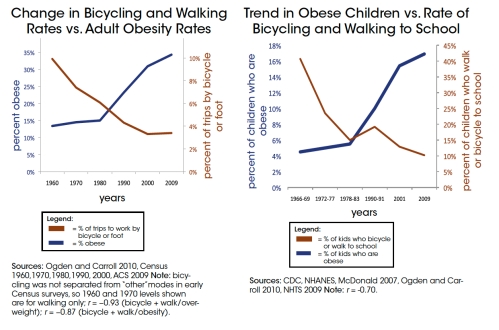 “We assert that current transportation engineering addresses only limited individual components of the region’s street network. This results in a fragmented and inefficient system that fails to adequately engage the social, environmental, and economic aspirations of communities.”

These principles advocate a human-scaled urbanism, where the act of walking represents the basic unit of design. And instead of having a street just provide a transportation service, it looks to monetize governmental investment in infrastructure by choices that are “magnets for business, light industry, jobs, and economic opportunities.”

This project lays out seven principles for creating livable street networks, then talks about the six key characteristics for implementing the principles.

As always, the points where multiple modes of transportation intersect are the places that have the highest ROI of Movement. Places that thoughtfully coordinate the connections between the pedestrian, bike, transit, and car are the ones that generate the highest returns.

And why does implementing these principles matter?

Despite the $200 billion per year the US spends in transportation infrastructure, the country has higher traffic fatality rates than any developed nation. Engineering has been focused on moving cars and trucks quickly, yet transportation delays per capita has more than doubled since 1982, and the US has the highest vehicle miles traveled per capita globally. Americans spend more time in their cars than anyone on earth.

Not really the American Dream. Something isn’t working as planned.

The DNA of Place
Looking at the ROI of Movement here, we’ve been mainly talking money. But when you find a character-rich, highly valued place, you’ll also find a high quality of life and lowered environmental impacts per person.

When you dig further into what makes these places, you’ll conclude the streets are genes in the DNA of Place. Or maybe they’re even more like histones, which compact and organize DNA.

Just as DNA is essential to life and health, streets are essential to the health of our urbanism – and therefore to our economy, society and environment.

In old urbanism, streets are nearly as complex as the double helix of DNA. Unnaturally simplifying streets as we have over the last 65 years, into a meager selection of freeways, arterials, collectors, locals, and cul-de-sacs have put the health of cities and economies and people at risk.

Just as in complex lifeforms, urbanism isn’t easily put into a petri dish for studying one moving part at a time. But until we understand – and appropriately value – the ROI of Movement, the DNA of Place is at risk.

9 responses to “On the Street: The DNA of place and the ROI of movement”