Having worked in communities big and small across the continent, we’ve had ample opportunity to test ideas and find approaches that work best. Urban design details. Outreach tactics. Implementation tricks. Many of these lessons are transferable, which is why we’ve created “Back of the Envelope,” a weekly feature where we jot ’em down for your consideration.

What counts as a win in public engagement?

It’s not uncommon for municipalities — and consultants — to “score” engagement as though it were a contest. The most points win. And you accumulate points by counting how many: How many notices issued and media employed. How many seats filled. How many ideas collected. How many tweets or page views. The bigger the numbers, the more successful the effort.

The appeal is obvious. Numbers justify. If anyone’s unhappy with the outcome, well, they have no one to blame but themselves. The word was out there. Meetings were held. Political cover has been established. Great for CYA.

Yet we all know about successful processes, as measured by the how-many count, that flunked out when it came to producing real, measurable results. So long as you view engagement essentially as an end goal, you’re missing out on its true value as a tool for moving communities forward.

We unsettle people when we tell them, no, your goal shouldn’t be engagement. It should be disengagement. Reaching a point where trust has been built, people are satisfied and they retreat, confident that their interests are not being undermined.

It’s the customer satisfaction level we seek for any other product or service we contract for. Why not for government?

Disengagement — the point at which vigilance and cynicism drop off — is not where things end. It’s where real progress begins. Where government can actually begin to function effectively.

But here’s the rub: You need to go through engagement — purposeful, strategic engagement — to get there. You need to build trust by listening, responding, committing to meaningful action, and following through. You need a discourse that acknowledges complexity, weighs trade-offs, and shares benefit. All of which means a lot more than simply coming up with more ways to collect input. 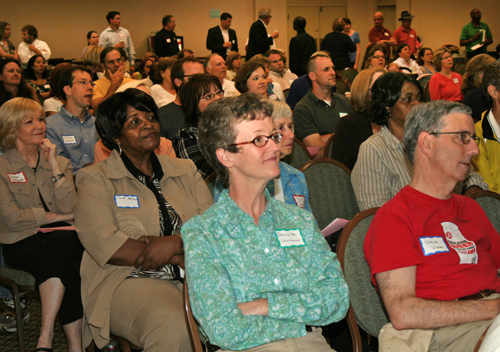 The success of Decatur, Georgia's 2010 Decatur Next strategic planning effort wasn't because it engaged over a thousand residents. It engaged over a thousand residents because, over the preceding decade, city staff and elected leaders actually did as they were instructed by the community's 2000 plan, meeting over 80% of its goals. Action builds trust, which allows people to contribute and then comfortably let go which, in turn, allows government to get down to the business of governing.

Here’s your guide to achieving disengagement:

Identify supporters. Start with who you know but the real key is who they know. Plug into their networks, build alliances of mutual benefit, and arm them with everything they need to be advocates.

Identify opponents. Opposition is rarely arbitrary. If people feel a disconnect between your goals and theirs, you need to understand why. Are they misinformed? Are there ideological differences? Where are there potential areas of shared interest? You may not be able to convert the opposition, but the act of listening is the first step towards common ground, as it removes their advantage of being inattention victims. By dealing with all participants on the same terms, you can likely detoxify the discussion enough to keep the process moving in a positive direction.

Connect the stories. Your community already has a story. Craft yours entirely in the context of theirs, with an eye towards clarity and simplicity. Find the connecting points, the shared context, the common values. And forget “facts,” at least the kind that are weaponized for debate. You can’t talk somebody into trusting you. Look for opportunities to demonstrate that you’re trustworthy. (Actually doing what you say you’re going to do is a good start.)

Define success. We see no shortage of RFPs that spend more time talking about the means — for example, social media and other online tools – than about the end goals of a project. We can’t stress enough: You cannot determine tools and tactics until you’ve determined where you want to go and whom you have to have on board to get there. You just can’t.

Design a self-correcting process. Listen. Respond with ideas to test. Use the feedback to tweak the ideas. Present again. Listen again. Tweak again. Repeat until there’s consensus for a set of proposals that are powerful enough to inspire yet are realistic enough to be achievable. If you’re doing it right, three feedback loops will produce the results you want.

Plan for incremental successes. To keep your advocates advocating, you have to reward them with short-term wins on the way to long-term accomplishment. Identify benchmarks or model projects that can be planned and implemented in a matter of months or less. Achieve them. Celebrate them. Use them to recruit more partners and more resources. And remind everybody how cool it is to trust a process and a set of co-collaborators that get them to places they’d never have gotten by themselves.

Filed under Back of the Envelope, Public Engagement

7 responses to “The goal is not engagement. It’s disengagement.”