Just after the close of World War II, the last Great Migration in the United States — the move from the city to the new suburbs — began to emerge, fueled by new roads, low congestion, and modest energy costs. It was a new beginning, a chance to shake off the past, and it came complete with the promise of more privacy, more safety, greater proximity to nature, and easier financing.

Not surprisingly, Americans bought in.

After that, it didn’t take long for the preferred retailers to do likewise, abandoning the city and following their customers to the suburbs. The suburban single family home on a large lot became synonymous with the American Dream.

After 60 years, many commentators have announced that the American Dream is poised to make its next great shift — this time from the suburbs to the urban core of our cities. Indeed, at the recent New Partners for Smart Growth Conference in San Diego, Chris Nelson, Joe Molinaro and Shyam Kannan made it clear that a radical shift in preferences is on the horizon. 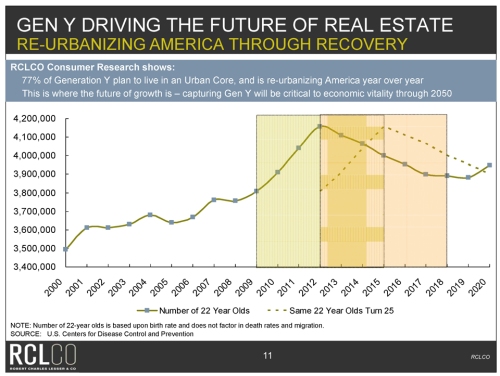 They’re not alone in that position.

Just last week, Robert Shiller of the Standard & Poor’s/Case-Shiller Home Price Index made the dramatic statement that, with our growing shift to renting and city living, suburban home prices may never rebound in our lifetime.

Why such pronounced findings? According to researchers, it lies in the preferences of our largest generation since the Boomers, the under 30 Generation Y (who like to refer to themselves as the Millennials). 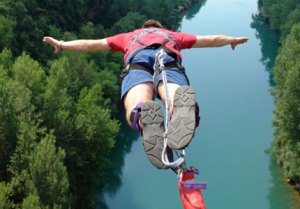 1. Safety to Adventure. Generation Y has grown up in the safest environment in human history. The suburban cul-de-sac offered a safe place to play, with lower crime rates than cities. But despite this safe environment, the need to fill a 24 hour news cycle in the emerging world of cable and online communications brought every localized “stranger danger” news story to a national audience, giving rise to the overprotective Helicopter Mom who oversees every minute of her child’s life. Whereas previous generations simply needed to come home before dark, Generation Y grew up with scheduled play dates and activities.

It should come as no surprise that this over-protected generation is more prone to celebrate dangerous and exciting activities like skydiving, rock climbing and bungee jumping.

2. Isolated to Connected. While the suburban cul-de-sac lifestyle offered the safest environment the planet has ever seen, it also produced the most isolated and disconnected environment. Today’s children rarely have the freedom to roam beyond the cul-de-sac, ensuring their social lives are determined by the quality of friends on the same street, together with the nature of their scheduled social interactions beyond their neighborhood. Indeed, the endangered species of the 21st century is the free range kid.

The net result? Generation Y wants to be more connected and less isolated than previous generations. They manifest this desire in their full-on embrace of social media and their desire to live in places where they can be around others; i.e., the densest, most active, areas of cities.

3. Inconvenient to Convenient. Convenience is another word for time, and Generation Y has a low tolerance for spending time on things associated with the suburban lifestyle — Saturdays filled with yard work or long commutes in the car.

Instead, they want the convenience of living close to the things they need, the things they do, and the people they do them with. They prefer the walk downstairs and around the corner to the neighborhood coffee shop or brew pub to the 20 minute car trip required in the ‘burbs. Also note that this is the first generation to grow up with the ubiquitous anti-drunk driving messaging of MADD and the harsher penalties for driving drunk. As such, all other factors being equal, they naturally prefer a place that allows them to walk, not drive home after a few drinks.

Developers of mixed-use communities understand this shift, and have been marketing their communities as places where you can live, shop, work and play — the places that are walk-able, bike-able, transit-able and drive-able as opposed to the drive-only conventional suburban development. This is simply another way of saying that convenience matters more than ever.

4. Car Dependent to Car Independent. Last week the New York Times reported that General Motors has hired MTV’s marketing arm to help combat Generation Y’s lack of interest in cars. Talk about a shift. Only a few decades ago the car symbolized freedom. Indeed, you were not socially viable without one. Now, Generation Y views freedom as being car-independent. How did this happen?

As stated above, the car is no longer a great convenience if it takes a 20 minute trip to buy a quart of milk (or a 6-pack of Belgian IPA). And if the trip is characterized by stop lights and traffic as opposed to the free-flowing suburban streets of the 1960’s, it is no longer going to be considered cool — especially if the trip is in a minivan.

In fact, Generation Y would rather be on a bus or train where they can work or be connected to the internet and social media, which is why Google provides its employees a bus to work. 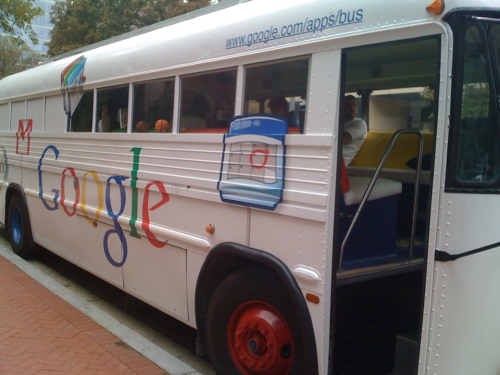 Generation Y wants freedom, not obstacles or anchors. So when it comes to where and how they live, they also exhibit a greater desire to rent rather than own.

Not the Only Factor: The Perfect Storm

As Generation Y ramps up the buying power they’ll need to fuel a Great Migration back to the cities — and the adventure, convenience, freedom and connectedness they offer — note that a few other factors will also play large roles. These include:

1. Aging Population.  When you turn 80 in the suburbs, you begin to realize that your lifestyle is contingent upon your ability to drive. As the Baby Boomers continue to age in the next few decades they will increasingly choose cities where they can walk or take transit over the alternative: independent and assisted living facilities.

2. Higher Energy Costs. Most analysts believe that energy will only become more expensive over time. This will increase the cost of living far from cities, and therefore contribute toward the revitalization of cities and the inner-ring suburbs.

3. Rediscovery of Urban Design Principles. 30 years ago it was difficult to find cities that were making life livable through excellent design. Today, knowledge of these principles is widespread, making it easier for cities to provide a better, even great, place to live.

4. Public School Reform.  The recent advent of charter schools, magnet schools and other alternatives have provided an opportunity for parents to enjoy excellent schools in many downtown areas for the first time in decades.

5. ROI Analysis. As government budgets become more austere, more municipalities will analyze their infrastructure investments based upon a Return-on-Investment analysis, something advocated by Joe Minicozzi. This naturally favors urban locations over suburban locations.

6. Lower Crime. Technological advancements over the past decade in surveillance and crime investigation have given us tools that make combating crime (as well as the perception of crime) easier.

7. Better Downtowns. While experts are already signaling the popularity of downtown living, these preferences are only likely to increase as our downtowns become better than they are today.

It’s Never Just One or the Other, But…

Just as cities were not completely abandoned in the 20th century, suburbs will not be abandoned in the 21st century. But the shift in preferences is clearly underway, and this radical change will manifest itself in the nature of real estate development over the next 20 years.